In lieu of an epic Arthurian poem, consider this blog our ode to Sir Richard Branson. 25 years after establishing his Virgin brand, Sir Richard seems pretty content – we’d be grinning too if we were in his position – but never complacent. And for that, we extol our man as a master of perpetually growing the Virgin brand, a tricky endeavor even for the most adept mogul-billionaire. 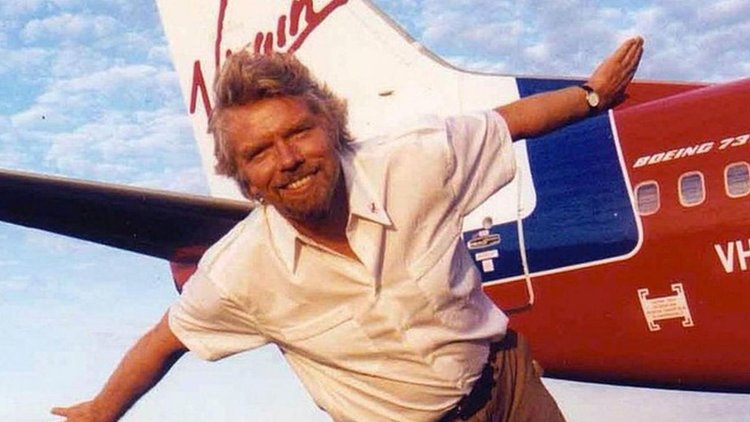 On a personal level, he’s more Sir Paul than Sir Gawain – that is, he has reconciled his iconic status with an endearing, shaggy-haired-bloke accessibility. He’s larger than life, but somehow not remote, and he has impressively navigated the tricky art of expanding a master brand without overextending it.

Ask anyone to indulge you in a round of the Virgin Brand Word Association Game, and you’ll likely get a variety of responses. When I say Virgin, you may think of:

(1) The origin of it all, Virgin Records. From its humble beginnings in the 1970’s as a mail order record catalog, the business grew into a chain of Virgin Megastores, with the record company ultimately absorbed by the world’s third largest record company, EMI.

The record company and Megastore laid the foundation for decades of brand equity, as the Virgin name became synonymous with hipness as well as accessibility.

(2) If your respondent is an Angeleno, they may say Virgin Australia (technically named V Australia, as Virgin Atlantic shareholder Singapore Airlines put the kibosh on using the master brand name for the Aussie endeavor), whose ubiquitous billboards illuminate a large portion of LA skyline. Capitalizing on the insanely lucrative LA to Australia air travel route, not to mention minimal brand competition, Branson et al recently launched Virgin Australia, an appendage of his Virgin Air brand, which also includes Virgin America and Virgin Atlantic. For the record, one BrandCulture member is quite smitten with the latter after a recent trip to the UK.

The airline has garnered success by wisely positioning itself as a cheeky, quirky, and fun airline, while also asserting value and bang for buck. In the generally staid, beige airline industry, Virgin offers a vibrant crimson shot in the arm.

(3) If your respondent is a brand enthusiast, hospitality maven or luxury connoisseur, they may cite Virgin’s Limited Edition venture, Branson’s foray into luxury hospitality.  According to a BrandCulture sibling residing in London, the poshest club in town is, you guessed it, part of the VLE group.  We’ve not yet hobnobbed there, but from afar we’re delighting in the Virgin sub-brand’s name, a departure from traditionally descriptive names in favor of the evocatively luxurious and exclusive tones that Virgin Limited Edition exudes.

Is there anything Branson can’t do? Well, Virgin Cola probably won’t topple its biggest competitor (also crimson in hue) anytime soon – but we look forward to seeing what this lovable Renaissance Man rolls out next.

Over the past two decades popular opinion has shifted about the importance of an organization’s purpose — a raison d’etre that goes beyond financial metrics to encompass benefits from improving company culture for employees to saving the environment from climate change. This purpose is intended to serve as a guiding light for the organization, showing […]

Despite their acclaim and notoriety, Chief Revenue Officers (CROs) are only a recent addition to the C-Suite. Charged with aligning and leading a cohesive revenue team that consists of Marketing, Sales and Customer Success members, the CRO remit is to unify silo-ed departments, create frictionless revenue generation and drive a more positive customer experience. The […]